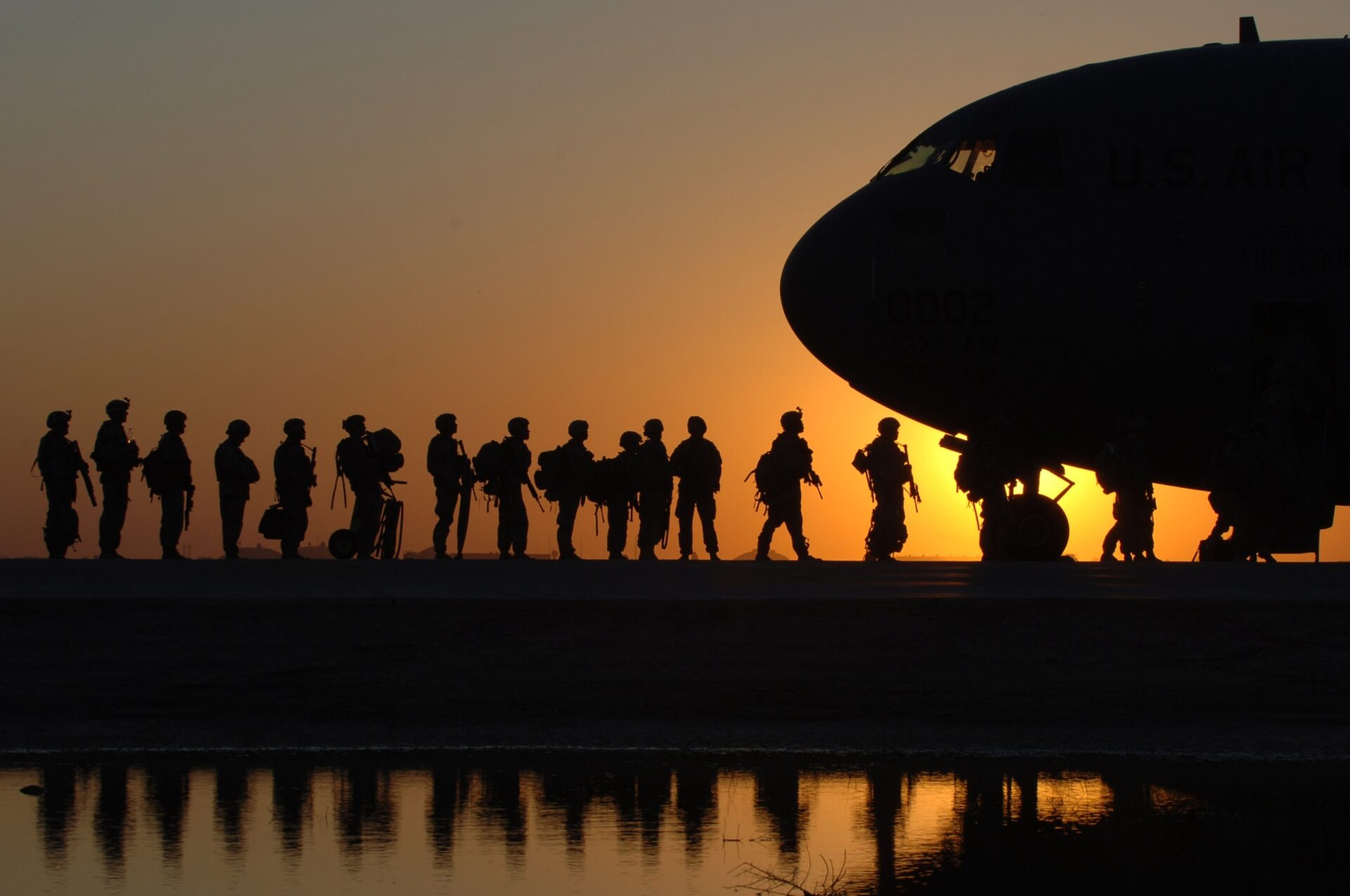 February and Forever: Celebrating Black History Today and Every Day

While Black History Month occurs each February, it is important to acknowledge and support Black Canadian service members and Veterans every day of the year.

Black Canadians have committed themselves to serving our country militarily, at home and abroad, since the 19th century. From the Victoria Pioneer Rifle Corp in the 1850s to Black service personnel fighting bravely in Afghanistan, and caring for the elderly during a pandemic, there is a long history of heroism and selflessness to share, to reflect upon, and to celebrate.

Throughout the month of February, we will present profiles of Black Canadian Veterans who were active in many conflicts, some more recent and some from many years ago. We will share stories of valour and strength, compassion and care. These are the stories of our brothers and sisters in arms who fought along side their comrades with a common purpose and goal – to ensure the success of their mission, to protect the innocent, and to represent Canada with honour.

We encourage you to follow our Black History Month posts on our social channels – Facebook, Twitter, and LinkedIn – and to return to this page throughout the month for new profiles of brave Black Canadian Veterans.

For additional resources celebrating the achievements of Black Canadians in the military, please visit: 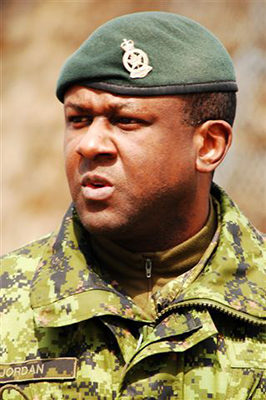 Having served in the CAF from 1987 to 2012, Warrant Officer (Ret’d) Cyril Jordan’s 23 year-long career is an inspiration to many. Jordan started his career in the Royal Montreal Regiment (RMR) in 1987. In his tenure at the RMR, Jordan found community and family. He speaks highly of the RMR for being a diverse unit that embraced individual and team strength.

In 1990, Jordan embarked on his first tour in Cyprus. Being the only Black person in his company, Jordan quickly learned the challenges he would have to overcome to succeed within the ranks.

Without struggle, there is no perseverance. Jordan often had to remind himself of that: That things won’t always come easy, but they are worth pushing through. And it’s a good thing Jordan did push through. Things started to change throughout this tour. As team members moved to new positions and postings, things improved.

After his first tour ended later in 1991, Jordan’s career progressed as he took on his second tour in Yugoslavia. Throughout these tours and his career, Jordan met lifelong friends and began climbing the ranks progressing to meet his retiring position of Warrant Officer.

The road was not always easy. Although Jordan felt welcomed and accepted in his home unit with the RMR, he still faced discrimination and setbacks throughout his tours. But as he tells his kids, “The worst thing you can do is let someone knock you down. When you get knocked down, you have to get back up.” And that is what he did. 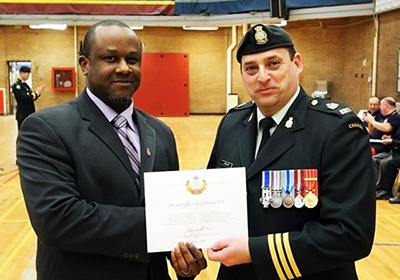 Jordan’s extensive career is represented by the United Nations Peacekeeping Force in Cyprus (UNFICYP) Medal, and the UN Protection Force in the former Yugoslavia (UNPROFOR) Medal. Also, he is the recipient of the Canadian Peacekeeping Service Medal (CPSM), the Queen’s Diamond Jubilee Medal (QDJM) and the Canadian Forces Decoration (CD) with clasp.

“I’m proud of both the tours that I did. I’m proud that I still persevered through all the issues that I had to deal with in regards to being a visible minority. I’m proud that I didn’t let anything stop me from moving forward. And if I had one piece of advice to give, it would be, take the step forward and see what happens. You never know where you’ll end up.” – Warrant Officer (Ret’d), Cyril Jordan. 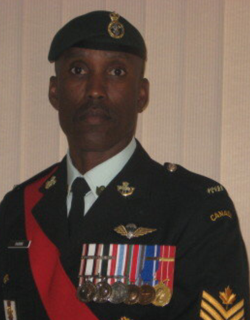 Sgt (Ret’d) Arnold Parris can express his experience joining the Canadian Armed Forces (CAF) in a few words, “It was the best decision I ever made!”

As a young man, Parris was always interested in joining the military. His inspiration to join the Army never wavered despite being warned off by some stating that it was not a good environment for a young Black man. However, after being urged on by a Veteran from the Vietnam War, Parris joined the Army reserves in 1978 and subsequently full-time service in 1983.

Parris’ experience as a Black member of the CAF was the opposite of what some people had told him. Within the ranks, he found community, comradeship, a sense of purpose and, most importantly, family. He wasn’t oblivious to the fact that racism was present, but he wasn’t going to allow the actions of a few tarnish his new found life as a Canadian soldier.

After basic and trades training as an infantryman, Parris joined the Second Battalion Princess Patricia’s Canadian Light Infantry (2PPCLI). He was immediately impacted by how soldiers performed together under duress, especially in the field. His first overseas duty was in CFB Baden-Sollingen, in what was then known as West Germany. 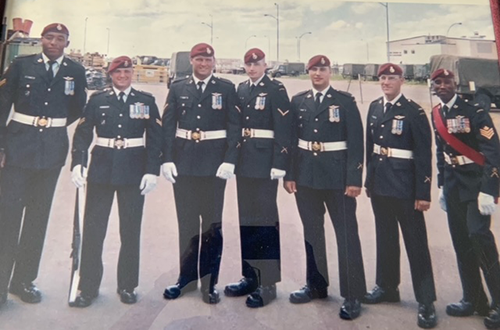 Parris excelled in the physical aspect of soldiering, and when given the opportunity to serve in the Canadian Airborne Regiment, he took it. He served two tours, 1988 until 1992 and then again in 1994. Being a paratrooper was the highlight of his career – Germany was good, but this was better.

Amongst his medals for the various overseas tours, The Special Service Medal with NATO Bar, the United Nations Protection Force in the former Yugoslavia (UNPROFOR), NATO Medal (BOSNIA) and the Afghanistan Campaign Star. He is the recipient of the Canadian Peacekeeping Service Medal (CPSM), the Canadian Forces Decoration (CD) with two clasps, the Canadian Forces Sacrifice Medal. He has received two Commander-in Chief Unit Commendations, 2 PPCLI Battle Group for their actions in Croatia and 3 PPCLI Battle Group for actions in Afghanistan.

Parris reflects fondly on his time in the CAF. One of his postings was as a recruiter, and his role was to create awareness of the different employment opportunities within the CAF in visible minority communities, specifically young Black men and women. He would say that “It’s the best kept secret,” and echoing the sentiment of the Veteran who urged him on, “Join now! And when you do, regardless of what happens – don’t quit!” Great advice from such a distinguished soldier. 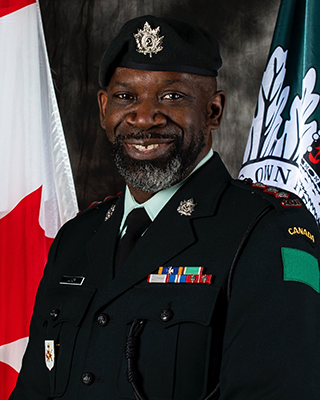 Captain Kevin Junor’s 34-year plus career with the Canadian Armed Forces (CAF) has made an impact to last decades. In 1980, Kevin enrolled as a private soldier with the Toronto Scottish Regiment. He climbed through the ranks to become a Chief Warrant Officer (CWO) in 1998 and was appointed the Regimental Sergeant Major (RSM). This was a significant appointment, as the RSM is considered the most tenured and experienced soldier within a unit that represents all of the NCMs and is the primary advisor to the Commanding Officer.

On his operational tour to Sierra Leone, Kevin served as a Senior Military Advisor. He was assigned to help restore and advise the Republic of Sierra Leone Armed Forces (SLAF) after its decade-long civil war. As a Black man on this tour, Kevin felt he could make an impact by going above and beyond his regular duties. So he did.

Kevin noticed a gap in the professional development training for the SLAF RSM cadre. With that need for improvement in mind, Kevin developed a training program. His program concentrated on leadership, change management, and team building. He conducted the course in 2007 and it was conducted as late as 2011. This program created the rubric for the future. Kevin looks back on this experience as something he is most proud of. Giving others the opportunity to be given the appropriate respect for their position for the first time in their military career, that’s what it was all about. 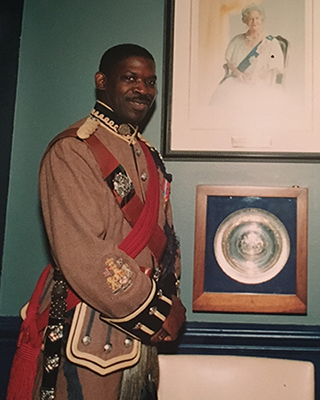 After being the RSM, Kevin became a diversity advisor within the CAF, in which he was the National Military Co-Chair of the Defence Visible Minority Advisory Group. In 2020 Kevin began his operational tour in Jordan as a Project Officer.

During this tour, he was responsible for coordinating a gender integration seminar. Always the innovator, Kevin took this opportunity to do something different. He proposed a new model to restructure the seminar by concentrating on the experience of the Jordanian Armed Forces (JAF). This approach was new and was a big shift from what was done in the past. For the first time, the seminar was run entirely in Arabic and led by the JAF, with the CAF as support. Similar to his experience in Sierra Leone, this format became the new model going forward. 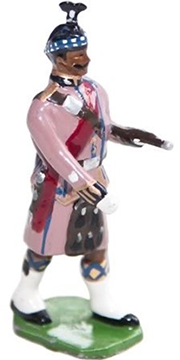 Kevin has earned countless awards and honours throughout his career, including the Order of Military Merit and the Harry Jerome Professional Excellence Award. He even has a miniature toy soldier modelled after him and was also one of the few Canadians invited to the Queen Mother’s 90th birthday, 100th birthday, and funeral.

Kevin enjoyed his time with the CAF so much that he took his commission to Captain and continues to serve to this day. He speaks of the CAF as a great place that will challenge you, stretch you, and a place where you will learn more than you ever thought you could. If he had one piece of advice to give, he would say, “Don’t let anybody define who you are. You have the ability to define yourself and don’t give that power to anybody.” 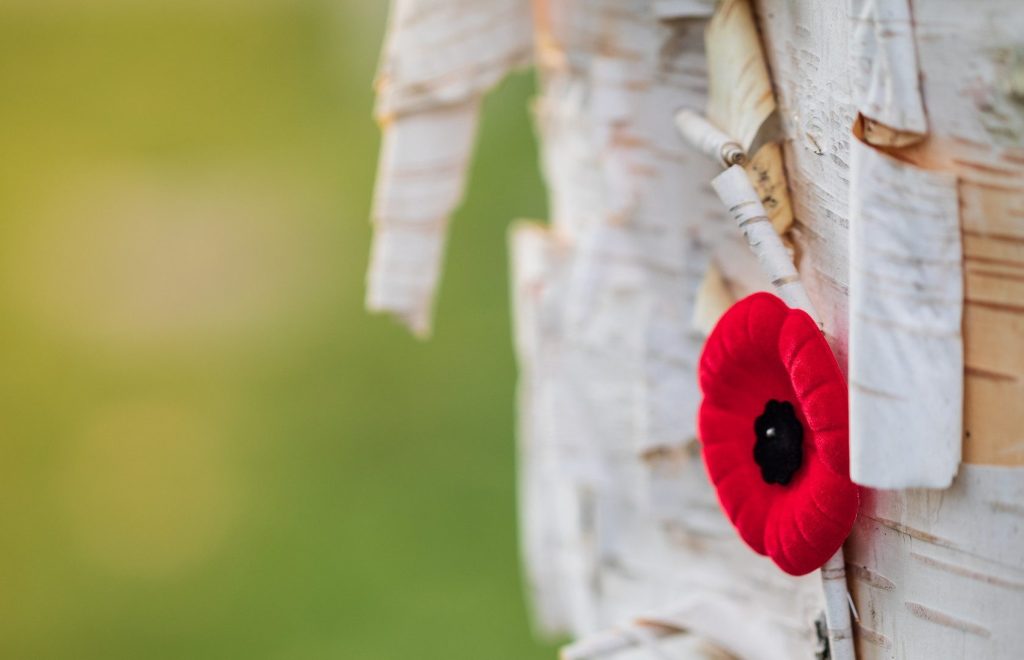